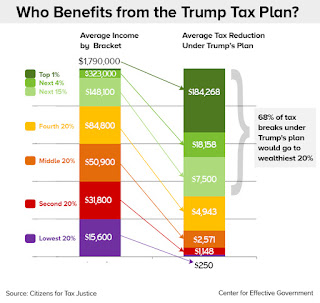 Donald Trump, 2016 presidential candidate, created a tax plan (titled The Trump Plan), boasting it will create 25 million jobs, boost growth up 4 percent, that it is revenue neutral and that it might even pay for itself.
As according to Trump’s campaign website www.donaldjtrump.com, The Trump Plan will (1) Reduce taxes across-the-board, especially for working and middle-income Americans who will receive a massive tax reduction, (2) Ensure the rich will pay their fair share, but no one will pay so much that it destroys jobs or undermines our ability to compete, (3) Eliminate special interest loopholes, make our business tax rate more competitive to keep jobs in America, create new opportunities and revitalize our economy and (4) Reduce the cost of childcare by allowing families to fully deduct the average cost of childcare from their taxes, including stay-at-home parents.
The Trump Plan will collapse the current seven tax brackets to three: (for joint-filers) 12% for income less than $75,000, 25% for income between $75,000 and $225,000 and 33% for income above $225,000 (*brackets for single-filers are ½ the above amounts)
The nonpartisan Tax Policy Center (TPC) organized a new analysis, de-bunking Trump’s vision-statements from the true effects of his proposed policy. Rather than increasing growth, The Trump Plan would substantially reduce economic growth due precisely to the fact that it is not revenue neutral; not even in the slightest! It turns out that his tax plan would be a massive giveaway to the wealthy class, costing over $6 billion to taxpayers, before interest payments, over its first decade in progress. Half the profits would then be directed to the top one percent.
The Wharton Budget Model (PWBM) from the University of Pennsylvania was used to determine TPC’s results. They project larger amounts of spending money being directed into the pockets of average people in the shorter time-span, however by 2025, the plan would make the national debt inflate exponentially causing interest rates to skyrocket for both businesses and consumers.

Posted by Stratton Group of Keller Williams Southern Arizona at 11:38 AM